Attention: Confirmed registrants book their rooms through their euroPLX user accounts after log-in.

An impressive blend of tradition and modernity is reflected in the design of the Austria Trend Hotel Savoyen Vienna. Housed in the former building of the Austrian State Print, the hotel represents an architectural bridge from the past to the future.

This hotel is an extraordinary lifestyle product in the style of the 21st century. The former building of the Austrian State Print now plays home to the chic city-hopper, as well as the world-travelling businessman.

The daylight-bathed atrium, with its lounge and bar, is the focal point of the hotel. It is from here that guests access our 309 comfortably appointed rooms and suites, as well as the Fitness & Vitality Area.

The rooms' warm colours and floral motifs are reflective of the nearby Botanical Garden, creating an ambience of comfort and ease.

Confirmed registrants book their rooms through their RauCon user accounts after log-in. 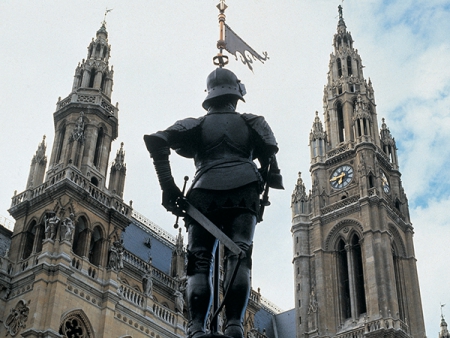 Iron Knight of the City Hall

The Belvedere Palace, adjacent to the hotel

Traditional front, a classic modern architecture behind the doors

The conference hotel - monumental outside, new and modern inside

Located as it is in the heart of the Diplomatic Quarter, Hotel Savoyen is the ideal base from which to explore historic downtown Vienna, as well as for your business appointments in the city. The magnificent park grounds of Palace Belvedere are also very close by.

From the Vienna International Airport to the Hotel

The distance from the airport is approximately 18 km. It takes about 20-30 minutes by taxi and 20 min by train (S-Bahn).

Vienna's September average 24-h-temperatures are 18 degrees Celsius. Average rainfall is about 40-50 mm, i.e. showers should be expected and an umbrella might be a good piece of travel equipment.

The Currency: the EURO

The currency used in Austria is the Euro. There is an easy to use Currency Calculator on the Web which calculates rates provided by the Federal Reserve Bank of New York.